Since 2007, the TOP-IX Consortium rolls out the “Red Carpet” of the Berlinale on your devices.
Thursday, February 9th, kicks off the 67th edition of the International Film Festival of Berlin and TOP-IX will be there as official streaming provider. From February 9th to February 19th, Red Carpet, Press Conferences, Opening and Closing Ceremony of the Festival can be watched on the Berlinale website, live and on demand. 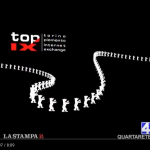 The history. The German Film Festival, from the edition of 2007, has decided to rely on TOP-IX for streaming of their content, following the good results achieved by the Piedmont consortium in the three-year collaboration with the Berlinale Talent Campus, on whose behalf it was responsible for the online management of the video.
Over the years, through the WiPieTv project and in collaboration with LaStampa.it, Radio Flash and Quartarete TV, TOP-IX has played also the role of “broadcaster”, realizing web-magazines about the highlights of the Festival.
In 2012, TOP-IX, in collaboration with K-Way Gallery, has rolled out the red carpet for a special guest, bringing the Apple-1 in Berlin, guest of honor of the exhibition “Homage to the information revolution”, in Berlin Computerspielemuseum.

Berlinale Palast. Big boxes with technical infrasctructure have reached the seventh floor of Berlinale Palast, where in a few days it was set up the TOP-IX headquarter. Thursday 9th, at 7:30 p.m. is staged the Opening Ceremony of Berlinale and begin live broadcasts. Enjoy the vision.

Ordinary General Meeting for the Consortium