RIPE NCC has just published the latest Internet Country Report, focusing on five countries in Mediterranean Europe: Portugal, Spain, France, Italy and Greece. The report looks at the history of Internet development in Mediterranean Europe, offers an overview of its market landscape and evaluates its capacity for future growth. We delve into the countries’ domestic connectivity, international transit, DNS access and routing and security, and make some conclusions about what is needed to support future development in this part of the world. 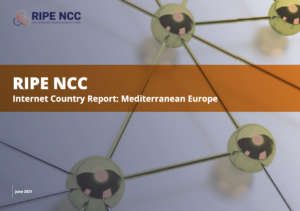 These five countries all show a high level of Internet development, healthy market competition, and robust and resilient Internet infrastructuret. Although IPv4 shortage is less of an issue in this region than other parts of the world, further IPv6 deployment is still needed to achieve EU-wide connectivity goals as well as future growtht. The level of IPv6 deployment varies greatly in the region, with several countries at the forefront while others lag significantly behindt. Routing in the five countries is generally quite optimised, although there are a number of anomalies significant enough to affect response timestThe five countries have a diverse number of routes connecting them to the rest of the global Internet. 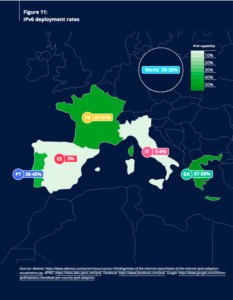 These countries have a long history of Internet growth and development and although incumbent providers maintain a large footprint, the markets have evolved to be quite open and competitive, providing a good level of choice for enterprise and consumers. These countries benefit from robust infrastructure and high rates of Internet penetration. Some of the providers in this region are global players, such as France’s Orange Group, which has significant presence across Europe, the Middle East and Africa. Four of the five counties have launched 5G networks, with the exception being Portugal.

All five countries included in this report have relatively large amounts of IPv4 space for their populations. In France especially, we see the unusual case of there being more IPv4 addresses than inhabitants, with 1.2 addresses per
capita. In the other countries, this figure ranges from 0.9 in Italy to 0.5 in Greece, with Spain and Portugal falling in between, each with 0.7 addresses per capita. This is one to two orders of magnitude more IPv4 addresses per capita than we’ve seen in some other countries in the RIPE NCC’s service region, and can likely be attributed to the early Internet development that took place in Mediterranean Europe compared to many other parts of the world. With such high address-to-population ratios throughout the region, first-rate connectivity coverage should be possible for these countries’ populations. Indeed, this is what we see in figure 6. Although Portugal and Greece do have some of the lower Internet access rates in the EU, these percentages are still very high on a global scale, and we see that all five countries continue to improve connectivity.Interestingly, rates for broadband subscriptions don’t follow the same pattern. While Spain scores highest on Internet access, Greece and Portugal have higher rates of broadband subscriptions per capita than Spain (or Italy). This is probably explained, at least in part, by the fact that Spain and Italy have the most mobile subscriptions per capita, suggesting that people in those countries rely more on their mobile devices for Internet connectivity than fixed broadband subscriptions.

Mediterranean Europe has a long history of Internet development that is reflected today in the region’s open, competitive markets, sophisticated infrastructure, skilled technical communities and high penetration rates. Enterprises and citizens alike have access to a wide range of digital services and largely affordable fixed broadband and mobile connectivity offered by a range of larger and smaller providers. Traffic flows between providers and through multiple exchange points – the result of regulators and operators working together and prioritising shared infrastructure and open access.

The domestic networks in each of the five countries are highly interconnected, providing a good level of resiliency and redundancy. Similarly, each country is connected to the rest of the global Internet by a large number of diverse routes into and out of the country, adding further stability and reducing the potential for disruptions or outages.

Routing is generally optimised for fast response times, although there are a number of cases where more distant exchange points seem to be favoured over domestic options, which unnecessarily increases costs, foreign dependencies and risk of disruption. Countries in Mediterranean Europe enjoy high Internet penetration rates and large amounts of IPv4 address space. However, further IPv6 deployment will be crucial to connect the millions of remaining households that are yet to be connected as part of the EU’s connectivity goals for 2025 and beyond. It will also be needed to support the roll-out of 5G and the development of IoT and other emerging technologies.
It’s worth noting that all of the observations in this report are based on active paths, and we cannot know what “hidden” world of backups exists that would automatically take over in the case of any disruptions. Whatever redundancy does exist would provide the system with even more resiliency