Net neutrality is crucial to the future development of the internet. It is the principle that all online traffic should be treated equally, regardless of the type of content or platforms involved. On 27 October MEPs are set to debate and vote on new rules on net neutrality, following an agreement reached with EU governments after two years of negotiations. 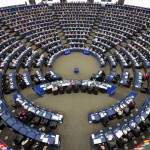 On European Parliament website, Net Neutrality is described as “the principle that internet service providers should treat all online content, sites and platforms equally, for instance without blocking or slowing down specific websites or services on purpose”. However, critics say the term is not defined clearly enough in the regulation on the European single market for electronic communications, which MEPs are due to vote on during the plenary session in Strasbourg next week.

Among the critical positions, the movement Save The Internet  has launched a campaign to put pressure on the euro–deputies to “save the Internet”.

If approved next week, the draft regulation would immediately enter into force in all member states. Six months after that, the Body of European Regulators for Electronic Communications would issue general guidelines for national regulators, responsible for overseeing the implementation.